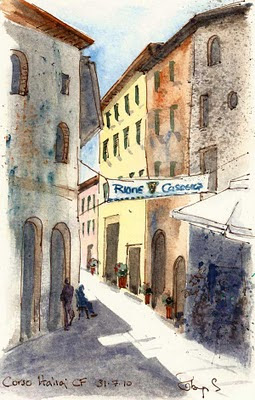 I was out bright and early this morning to make my contribution to today's Worldwide SketchCrawl. This is the main street in our little Tuscan hilltop town.

Actually I thought today was the 5th birthday of my blog but checking back I see there was a short experimental post on July 8, 2005. Anyway I thought I would celebrate five years of blogging by offering this little pen and watercolour sketch to someone who comments on my birthday post.

I was going to ask Dermott to draw the winner but he really can't be trusted so instead I will use a random number generator.

There have been a lot of blog birthday celebrations lately and it's not surprising that people do want to mark the event. I have made so many true friends and received so much support and encouragement from you all. This is my way of saying I'm truly grateful.

Your comment does not have to be fulsome in praise, just say you were here. Do comment before August 8. If your number comes up I will contact you for a postal address to mail off the painting.
Posted by Robyn Sinclair at 2:23 pm 36 comments: 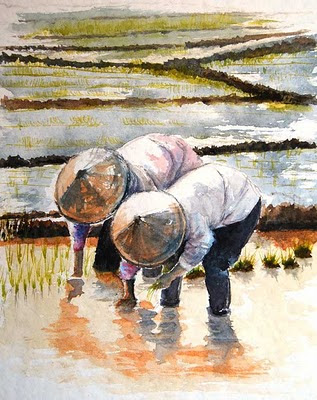 I've just bought myself a Winsor & Newton Tyne metal easel which is letting me stand to paint and hopefully get a bit of free shoulder movement into my work. I found inspiration for this watercolour in the travel section of an Australian newspaper. Unfortunately I can't find a credit for the photographer but hopefully they will understand this is just a 'student' exercise.

It's been a while since I managed to quickly paint something for the sheer pleasure of it.
Posted by Robyn Sinclair at 10:13 am 23 comments: 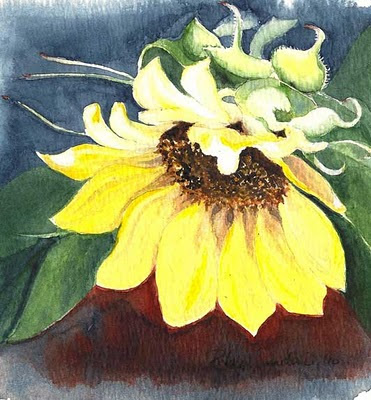 The sunflowers in the garden continue to delight, mostly for the birds they are attracting. My watercolour effort feels strangely lifeless. I was happier with the quick sketches I made seeking the spirit of sunflowers. 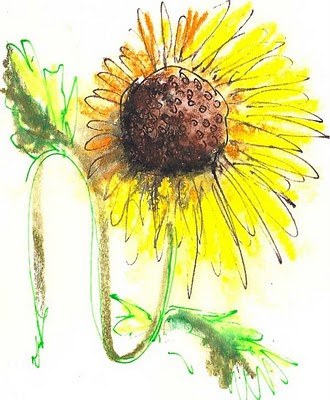 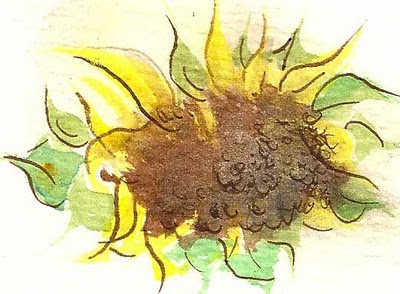 watercolour & pen
Posted by Robyn Sinclair at 9:33 am 7 comments: 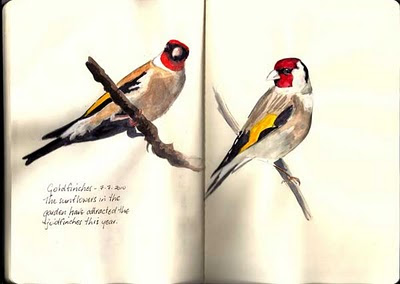 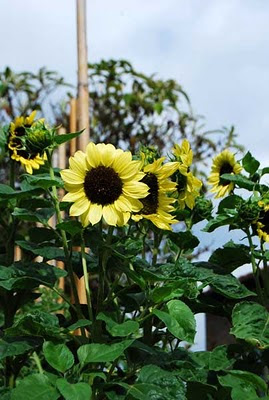 Sunflowers for art and birds

We seem to have more birds than ever visiting our Tuscan garden. I tried in vain to feed them during the winter but none showed interest in my plastic feeder of mixed seed. This spring HWEM planted some small sunflowers for me to paint and now they are going to seed I finally have birds feeding right outside my window. I am really excited about the beautiful goldfinches and am spending a considerable amount of time watching them through a tiny pair of binoculars that were a giveaway at the Stingers launch years ago.

My Nikon 18-55mm lens isn't any good for birds so when I do get a photo I still have to do a lot of guessing about colour and detail. I'm sketching the goldfinches from a combination of photo and life, hoping that I'll become so familiar with their form I will eventually be able to make quick sketches from life.
Posted by Robyn Sinclair at 10:17 am 8 comments: 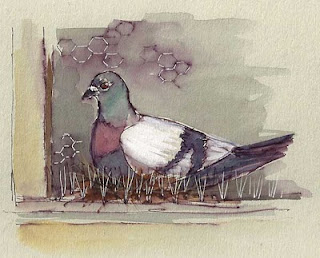 Watercolour & Gouache pen sketch on grey paper
There are pigeons nesting opposite our living room window. It's causing me a great deal of anxiety because the foolish couple built their nest on top of lethal spikes placed on the window sill to discourage such nesting and resting. Now there is at least one squab in the nest, I saw a tiny head for a fraction of a second, and I'm terribly worried about how the babies are going to get across the spikes to learn to fly.

I know many of you don't like pigeons but as I've said before I have a soft spot for them, probably because they are the only birds that will sit still long enough for me to sketch them. Nobody around here wants to give them a home unless it's to fatten them to eat. 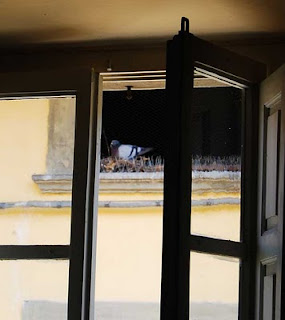 Not much of a photo but the best I can do without a bigger lens.
Posted by Robyn Sinclair at 4:35 pm 14 comments: