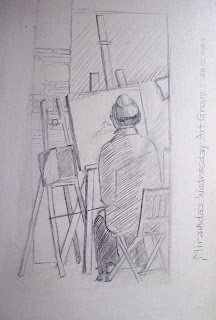 Wednesday is the day my Art Group meets. I love saying that!

It's taken almost two years for me to find a local art group. Now, thanks to generous friends, each Wednesday afternoon I will spend three hours in the art studio of a beautifully restored 13th century convent owned by the Tanganelli family.

Back in September the first sketch I did in my Moleskine was the restored convent, Residence Le Santucce. 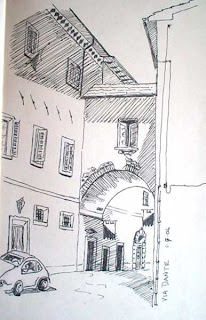 I had no idea there was an art studio behind those walls. Fate!

At present everyone is painting in oils - the only medium I don't have in my mini-warehouse of art supplies. Yet! 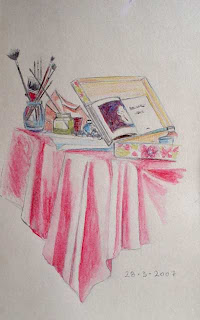 This week I just sat quietly and sketched. Quietly, because only my gracious hostess, Miranda, speaks English. Everyone hopes this is going to help my Italian. If this doesn't motivate me, nothing will! On the other hand my companions are more likely to improve their English.

Next Wednesday I'm going to dip a toe into the world of classic oil painting. To say I'm excited would be an understatement.
Posted by Robyn Sinclair at 1:54 pm 10 comments: 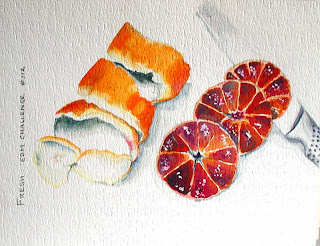 This little exercise was supposed to loosen me up for the 'big' watercolour I've been putting off. Ha!

Not sure if it still qualifies as a drawing - even though it started as a drawing. And is it 'Fresh' or is it 'Flesh'? There is a hint of violence about about the 'blood ' and the knife. What do you think?
Posted by Robyn Sinclair at 12:29 pm 20 comments: 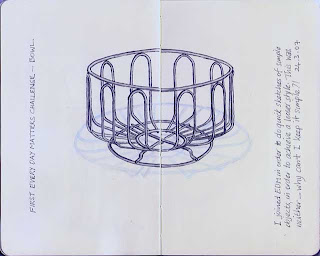 I finally joined in the Every Day Matters Weekly Drawing Challenge with #111 - Draw a Bowl.

I'm hoping the discipline of drawing a simple object from life once a week will loosen me up a little. We'll see. I'm my own worst enemy in that the bowl I chose to sketch was a tangle of wire and shadows - we do have normal bowls, I'm just too stupid to use them. Next challenge I'll try the KISS approach.

The Every Day Matters Group is a very friendly and supportive bunch and if you haven't already done so, I recommend a visit. The founder of EDM is Danny Greggory who is an inspiration to all who love to draw and particularly to those who would like to but think they can't. The group also has a blog of blogs.
Posted by Robyn Sinclair at 10:11 am 10 comments: 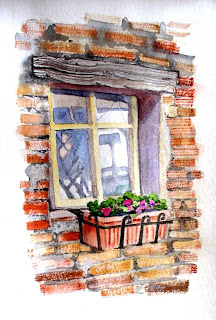 Our garden shed is getting a face-lift. What was to be my studio is now going to be a studio for HWEM. When it came down to it, he was prepared to share with his garden tools and boots and I wasn't.

So this is 'before' with broken window jammed shut with a piece of wood to keep out the generations of local cats who have lived and sometimes died in here apparently. I hope HWEM isn't going to be haunted - except maybe by guilt, for taking my studio!

This was the first outing for my new Moleskine watercolour sketchbook. I was very disappointed with the paper. It will be good for coloured pencil but watercolour looks quite dead on the page compared to my Clairefontaine Aquarelle sketchbook.
Posted by Robyn Sinclair at 3:37 pm 20 comments: 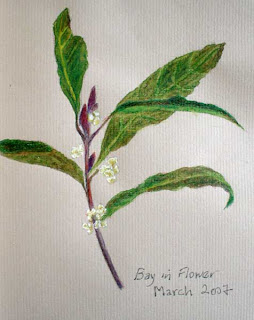 I've never seen a Bay tree in flower before but last year I did see one at the farm covered in berries. The Bay grows like a weed in Tuscany and we have some self-sown that will have to come out as they are trying to take over our whole garden.

This isn't my best botanical effort (watercolour pencils) but I'm hoping to improve having today ordered the book -The Art of Botanical Painting by Margaret Stevens, recommended to me by Katherine Tyrrell (Making a Mark). Katherine is my best resource for all things about Art online. For example she has a wonderful Squidoo Lens on Botanical Art that I'm just starting to explore.

This little project to record everything in the garden as it blooms is becoming a daily task and I think things are going to accelerate once this cold (make that freezing) snap is over. And, of course, it is a great excuse to put off that half-sheet watercolour I've planned that I'm still not greatly confident about.
Posted by Robyn Sinclair at 4:39 pm 6 comments: 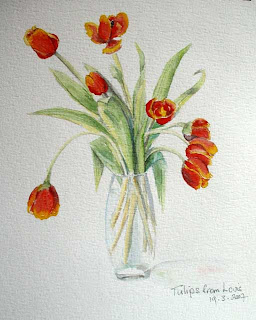 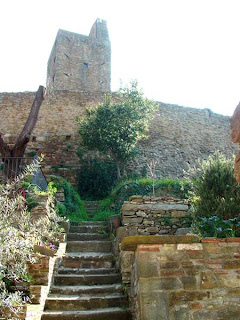 I know nothing about Botanical Art and any time I attempt to draw or paint flowers I am in awe of the skill of those who do.

I've had a small Fabriano Artist's Journal with multicoloured pages for quite a while and not been able to decide what to use it for - along with quite a few other beautiful untouched journals and sketchbooks! - so I've decided to use it to record the flowering of our garden throughout the year.

We inherited a very overgrown and neglected terraced garden when we bought our apartment. HWEM is passionate about growing vegetables and views flowers as useless interlopers in his domain. To date his attitude in the garden has pretty much been: 'If you can't eat it, kill it.' 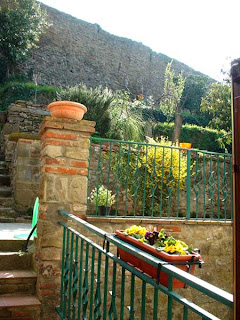 There are some spots in the garden judged unsuitable for vegetables and that is where I have been planting and discovering some existing flowers. The terrace is totally mine, so flowers will eventually rule there. HWEM is quite happy to cart loads of potting mix and terracotta containers up three flights of stairs to reach the garden so he's not a totally lost cause.

The excitement of inheriting a garden is discovering what each plant and tree is. One shrub we were about to pull out of the terrace saved its own life by starting to produce tiny mauve flowers. I later discovered it is Bush Germander, an infusion of which is apparently good for Gout. Life in Tuscany being what it is, it may come in useful some day! 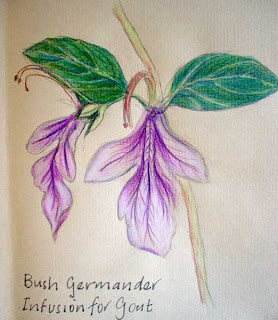 I made a tentative purchase of Crocus bulbs a couple of months ago and, being a total amateur at this, planted far too few. Now they are blooming beautiful! I can't wait to put in more next year. 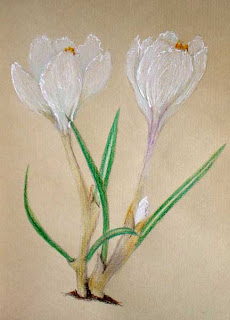 We have planted a couple of fruit trees - a Pear and a Cherry. There are Figs, a Loquat, an Olive, Bays, Grapes and a couple of other mystery trees awaiting identification. The first to bloom was what we had been told was an Almond but as it doesn't resemble the next door Almond tree, I'm hoping it's a Plum. 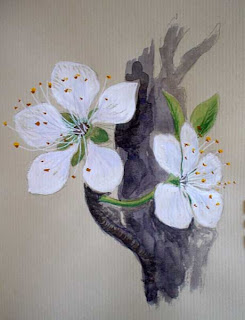 We had a mysterious small tree beside the terrace. Neighbours and a visitor of theirs who is a horticulturist identified it as a Peach. Now it has burst into a brilliant show of tiny yellow flowers - sadly no peach, it's the shrub, Forsythia. Since it's on the terrace it's allowed to stay. 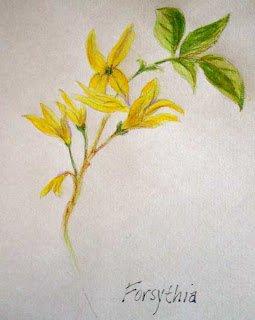 Now I'm sweating on the Wild Poppies that appear here, it seems, wherever the earth has been turned over. That is if HWEM doesn't spot them first!
Posted by Robyn Sinclair at 1:01 pm 8 comments: 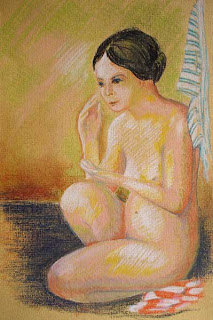 Have you seen the beautiful print by Hiroshi Yoshida - At the Mirror 1927. I'm interested to see if I can translate the subject to watercolour. There is a half sheet of Fabriano 300lb paper waiting, I've done the drawing but I'm procrastinating. There is something sacred about such a beautiful piece of paper. It's my first and it deserves the best. As it is, it is full of potential. I like that. I can think about how beautiful the painting could be.

So since I have a new box of pastel pencils I'm really just playing around at the moment. Perhaps I could call this a study after Hiroshi Yoshida. I also wanted to see if I could learn from Dagas' pastels, after the photo-realistic pastel still life I've just finished.
Posted by Robyn Sinclair at 1:34 pm 4 comments: 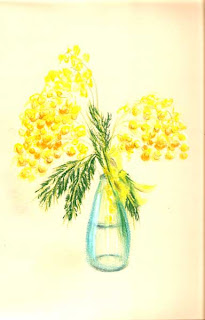 When we went to the bar for our morning coffee, I was presented with a little spray of Mimosa tied up with yellow ribbon. Of course they weren't to know that 'Wattle' as we call it, is Australia's national flower. A major moment of nostalgia, but what a lovely tradition here in Italy for Women's Day.

The sketch is very rough with my new pastels and certainly is NOT a result of the on-line workshop I'm doing with Dianna Ponting. That is much more sophisticated and 3D.
Posted by Robyn Sinclair at 11:45 pm 3 comments: 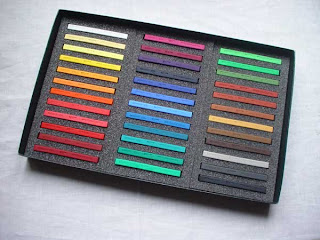 It was bound to happen. I've been following Casey Klahn's blog and admiring his pastel paintings and knowing I would NEVER go there because I can't stand the feel of chalk or soft pastel on my fingers and my only attempt, with an inferior set, looked like cave painting. That was all before I stumbled upon Dianna Ponting's soft pastel tutorial on WetCanvas. So off I went to Arezzo yesterday in search of a 100+ set of pastels. I returned with a 36 piece set, and a little white around the gills at the cost of that. So here I am surrounded by surgical gloves, baby wipes, drop cloths and dust.

Of course I realise the above photo may be the most beautiful pastel associated image I ever come up with. I guess I could always frame that. To be continued........
Posted by Robyn Sinclair at 2:26 pm 4 comments:

What My Sweetheart Fed to Me 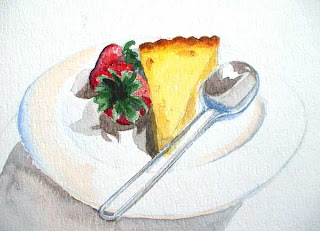 HWEM (He Who Encourages Me) also feeds me. He makes a scrumptious Lemon Tart. We won't mention the six whole eggs and nine egg yolks! For more lemon tarts and other amazing watercolour treats I love Paris Breakfasts. 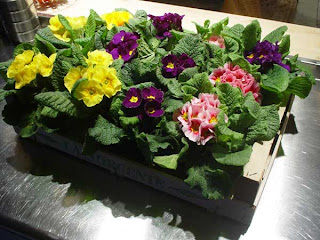 These are crying out to be painted but since they are crying out even louder to be planted, I had better attend to it. I guess I can't expect HWEM to do that as well!
Posted by Robyn Sinclair at 2:55 pm 7 comments: