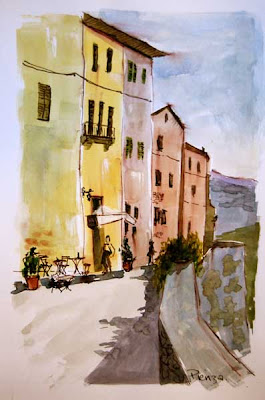 This was an experiment, sketching directly with dip pen and brown ink. I thought it was an absolute disaster while I was working and was glad it was in a perforated sketchbook where I could give it the Big Rip. Now, with all its flaws, I quite like it. Wonders will never cease.

Pienza is just across the valley from where we live. It is a tiny gem of a town constructed in 1459-61 because Pope Pius II thought the original village, Corsignano (his birthplace) wasn't grand enough . It is described as a folly, but what a folly. You can hardly move for visitors in the summer. I'm told Zeffirelli filmed some of Romeo & Juliet here.

My sketch doesn't do it justice so I'm giving you a photo as well. 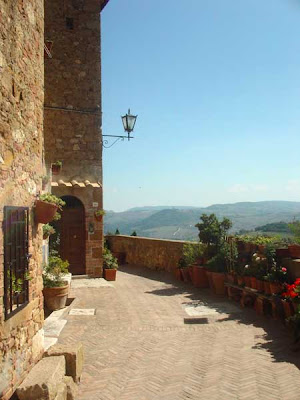 There are fantastic views from the walls. The Duomo and the beautiful Renaissance Palazzo Piccolomini I will save for another time. But don't say I didn't warn you about the number of tourists, if you come in the warmer months.
Posted by Robyn Sinclair at 5:19 pm

Robyn, it HAS been too long! I've added you to my blogroll :). I love what you did with the pen and brown ink! It really adds to the rustic feel that I don't think anyone could achieve with a technical pen. I so wish we could trade places right now. *sigh* It is such a treat to "see" this place through your eyes.

Hi Robyn!!! Oh hon, this is so charming!!! I LOVE pen and wash, and am especially enamored with any of Italy! There is such an energy in this Robyn -- I absolutely LOVE IT!

I really like this sketch Robyn - nice simple shapes and really good colours - works for me!

More trips out and sketches please.

Fast and loose suits you!

I agree with Anita - this is terrific - simple, passionate, and effective.
I am so envious - lucky you to love so close.

This is great! Love the feeling you have for the place. It really comes through in this piece. Pen and Ink are great. What kind of dip pen?

I love the looseness in this. It's really good! Plus, I think how the paint just sits on top of the paper is wonderful.
I'm planning a working trip to Montepulciano next autumn. How far is it from your valley? I can't wait to paint scenes like this.

I can feel the sun and see the colours in this. Sometimes what start out as mistakes turn into treasures.

Gorgeous! Makes me wonder why I didnt save hard throughout my life to at least visit Italy. Now I'm retired I wish I was there painting these wonderfully evocative villages with all their atmosphere and history you have managed to show us in your work. The photos say nothing in comparison. You lucky talented artist.

Robyn, your sketch absolutely does do the scene justice! I love it. That often happens to me - while I'm doing something it doesn't seem right at all, but look at it later and it's somehow come together. I guess that's the art fairy at work!

Oh, this makes me feel like jumping up and down--I LOVE it! It's so fresh and lively and it REALLY communicates a sense of the landscape and architecture you're lucky enough to be in the midst of! And I'm also so intrigued by your using a dip pen in the field! I'm taking mine with me to Hawaii and was wondering if I'd find the whole pen and bottle thing too much trouble. Your thoughts, dearie?

Laura - and anyone else who has been misled by this post. I did NOT sketch this picture from life. I took a number of photos in Pienza some time ago. I used one of them displayed on my computer screen to make the sketch.

I'm hoping this practice will lead to sketching with dip pen in the field when the weather finally warms up.

I'm on the lookout for an ink bottle with a wide solid base that won't get knocked over.

Sherrie - It's just an ordinary nib of the type used in schools and post offices before the invention of the Biro. I have some lovely Gillott mapping pens, but I think I prefer this cheap one that I actually bought to use with masking fluid.

Thank you ALL so much for the wonderful encouragement for this sketch, I think it was a breakthrough from my usual tight, fussy style and you've given me confidence to keep going in this direction.

it's lovely - and what a fantastic place! I love those towns built on the cliffs like that - you are so lucky to live in such a beautiful area!

I'd love it if something a bit like that appeared in my FPP exchange sketchbook! < not so subtle hint :>) >

Vivien - How lovely of you :) I'll have to get myself back into a reckless, devil-may-care frame of mind to do another of these. Easier said than done. I'll try some sort of landscape for your gorgeous book.