Collagraphs and Monotypes of Italian Subjects 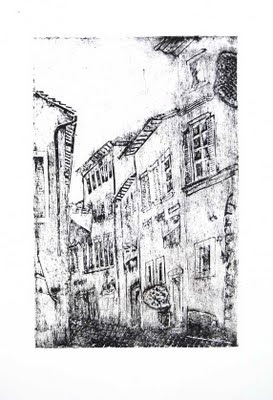 This handpulled collagraph print was developed from a sketch I made in the historic centre of our Tuscan village, Castiglion Fiorentino.

A reversed scan of my original sketch was transferred to a piece of cardboard and the outlines carved out with a sharp blade. Additional texture was made by gluing plastic net, tissue paper and pieces of scrap watercolour paper to the plate. The plate was then coated with Acrylic gloss medium and varnish and inked with black oil based etching ink. Areas of ink were wiped away before printing on C.M. Fabriano 100 percent cotton paper using an etching press.

I'm a big fan of the beautiful monotypes of Martin Stankewitz which he prints with oil paints. Since I have quite a stock of oils and have decided it's not one of my favourite mediums for painting, I got quite excited about the possibility of using up my paint for monotypes. Below is my first effort. 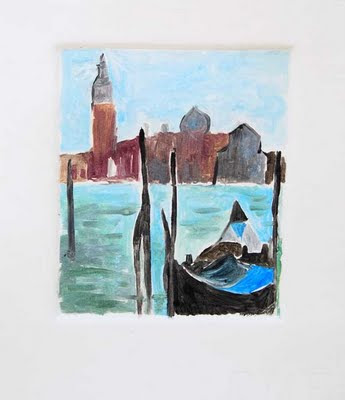 After this experiment, I'm even more excited about the potential of monotypes in oil paints. This photograph doesn't do justice to the beautiful silky finish of the paint on the paper and the result is much more painterly than I can achieve on canvas because painting onto a plexiglass plate, I don't get caught up in too much detail.

It's a lot of work for one unique print but I think I'm hooked.
Posted by Robyn Sinclair at 1:40 pm 17 comments:

Owl after Hiroshige - with a twist 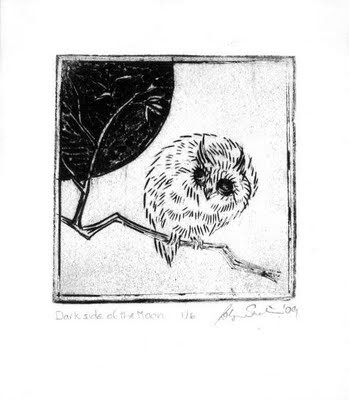 Dark Side of the Moon 3" x 3" intaglio print

I've fallen in love with a little Japanese print called Owl on Maple Branch in the Full Moon by Hiroshige. I saw the print at the Hiroshige - The Master of Nature exhibition in Rome earlier this year. Ever since I can't stop doodling the image of the little owl.

This tiny print was made using a small V-shaped tool to carve the image into a piece of recycled plastic advertising card and then wiped with oil-based ink and pulled through the etching press. This Hiroshige inspired owl is reversed and overshadowed by the dark side of the moon. 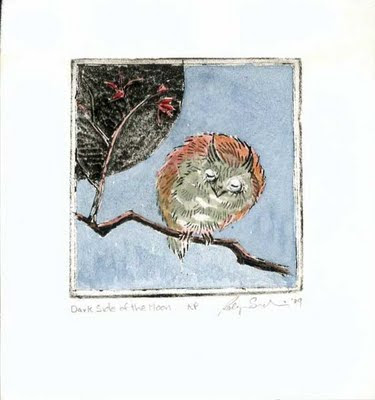 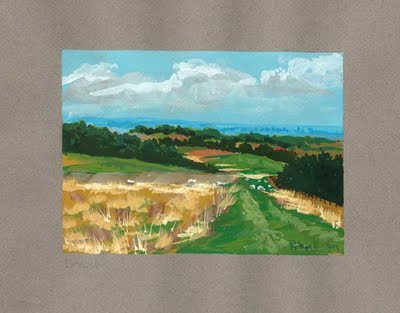 Even though August is supposed to be my printmaking month, I'm missing the little landscapes I was painting during my morning walks in July.

Since it's been too hot and I've been lacking motivation, I haven't been Sketchercising but when our friend Catherine M. sent some photos of a walk in the Dorset countryside, I decided to make it a gouache exercise. I'm still not at all comfortable with gouache but when I see what artists like Nathan Fowkes can do with opaque watercolour, I have to keep trying.
Posted by Robyn Sinclair at 2:13 pm 21 comments: 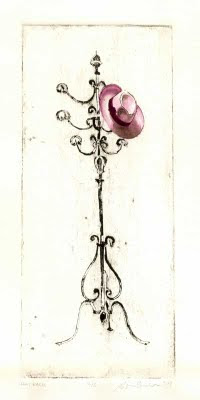 The plate for this collograph was carved out of a piece of thick cardboard then sealed with Acrylic Gloss Medium and Varnish. Each print was hand-wiped with oil-based ink and then run through an etching press. 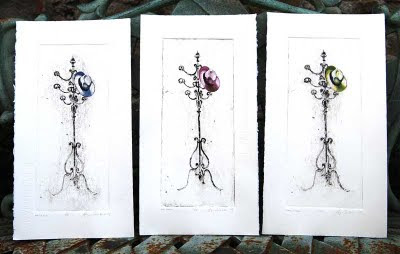 Hand painted limited edition of three different hand-coloured prints
Printed in black oil based Charbonnel etching ink on
Fabriano 100% cotton paper 17.5 x 33 cms
This is my first collagraph. I was inspired by the beautiful prints of artist/printmaker Belinda del Pesco who so generously shares her collagraph technique on her blog here.

The coat/hat stand we bought at a street market here in Tuscany. The hat is a white panama from Venice. After sketching the hat on the stand, I scanned my drawing and reduced it in size before tracing onto the cardboard plate. I've used some of my favourite colour combinations - Magenta/Sepia, Quinacridone Gold/Indigo and French Ultramarine Blue/Burnt Sienna to paint the hats.
Posted by Robyn Sinclair at 12:28 pm 17 comments:

Map! is a four letter word. I'm not good with maps - well that's what HWEM* says. He says I can't read a map. He usually says this when he is sitting behind the steering wheel - going too fast - missing our turn-off!

The Christmas before last there were two identical presents under our Christmas tree. We had each bought the other a TomTom portable GPS Car Navigation System. Since we now only have one car it was obviously a last ditch attempt, on both our parts, to save our marriage.

The story has a happy ending because, even though I had warned him: 'Don't buy me anything you want yourself!', I got to take the one he bought me back to the store, where I gave the nice young Italian a bit more money, and got myself the Nikon D40x digital camera I'd really wanted.

Where is this ramble going? It's going on a ramble! Some of you will recall I joined the Sketchercise Ning a while back as one of a group of artists who like to walk for pleasure and exercise and sketch along the way. Sketchercise was created by Katherine Tyrrell of Making a Mark. Joining gave me a tremendous boost because I actually started painting little watercolours en plein air.

Recently some of the clever people at Sketchercise started posting links to Google Maps that outlined the routes they took on their walks. Ignoring the fact that map! is a four letter word, I wanted to get with the technology and make my own Google Map which would not only include the route but photos of my paintings where I painted them. Easy! Well, not exactly. It may be a problem with my Mac not having an Intel processor but I still can't post a photograph on a Google Map, so I've come up with two alternative versions.

1. A map marking the routes of my regular walks. 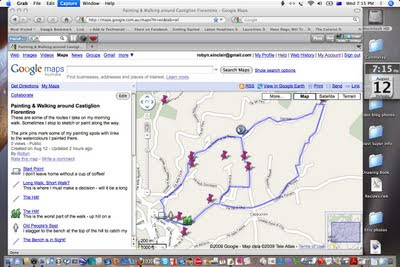 2. A map showing my paintings on location. I have lost a couple of days trying to sort this out but I thought some of you with smarter computers; more technological nous; time on your hands, might like to map where you paint and sketch and share it with the world. 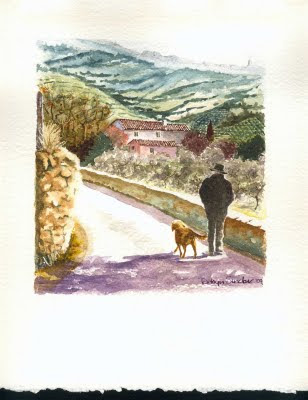