He Who Encourages Me 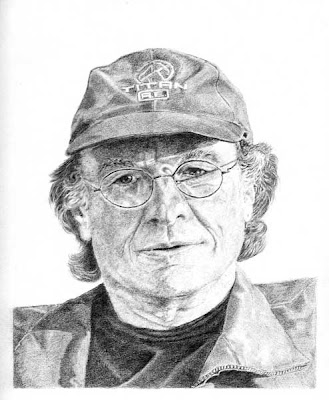 Feburary 2006 (my first attempt at a graphite portrait).

When I first met He Who Encourages Me (HWEM) he was writing on an Epson 286 PC, which didn't even have enough grunt to run the first version of Windows. I had been a Mac fan - using nothing else, since I laid eyes on the very first model. It took me a while to convert HWEM and I enjoyed that 'while' because, for once, I knew more about something than the did! Of course it was bound not to last - my superior position. Now whenever I have a computer problem, I give a plaintive yelp and he comes to the rescue.

Yesterday I discovered on Facebook that Dave of Dave's Blog has lost his iPod. Poor Dave, I was truly sympathetic but couldn't resist a little quip that this was his opportunity to upgrade to the latest model. Well, of course, I got what I deserved. The very same day I dropped my iPod. It continued to work for about 20 minutes and then froze. I tried every troubleshooting tip in the manual before I resorted to the Plaintive Yelp. HWEM was soon on his Mac - a man with a technical mission. 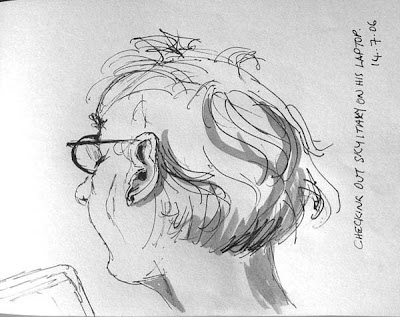 Meanwhile I started checking out the latest models in the Apple Store. I'd finally settled on the new 80 Gigabyte Classic and was thinking of adding some rather flash speakers when HWEM placed my old iPod on the desk. It was working!

In typical HWEM fashion he refused for some time to tell me how he had fixed it. It turns out, for that particular problem, you drop it a couple more times!

FANTASTIC painting, Robyn -- and journal entry! I cannot imagine how we'd do half what we do without our encouraging heros ... know, cara, you are one of mine!

He dropped it on the floor from waist height, I sat on it.

What a dashing man! Your portrait is beautiful. I bet he keeps going to it and wanting to check it out over and over again, right? I like the second quick sketch also, great job on the hair!.
ps. I love my new mac and still have so much to discover on it. as for my ipod and iphone...couldn't be without them :)

pss: did you do this from life or photo?

Great post Robyn - and I can sympathize with your plight. Having been the one who introduced my own HWEM to the world of Mac, I too enjoyed a short period of (for once) knowing more about something than he did. Of course, once converted things quickly returned to "normal". I even have a similar iPod story only mine involves leaving my iPod in the freezing cold of the car for a weekend followed by visions of the newer, shinier, thinner model but J. managed to find a fix for the old one instead. I still hold out hope that something will come along that he will not be able to figure out, but the older I get the more sure I am that I won't be able to figure it out either and both of us will have to rely on the expertise of my 12 year old. Ah, well...

Your sketches are beautiful. The graphite takes my breath away, and the pen and wash has such carefree playful lines. Both are simply wonderful.

It was a photo, Marta. This style of drawing takes forever - nobody would sit that long. It wasn't a well lit photo and there was a lesson in that. That's why the values aren't terrific. Live and learn.

This is pretty remarkable for a first attempt at a graphite portrait. It turned out great. A lot of personality comes through.

I remember this drawing Robyn and its still as fabulous as it was then.

My husband can fix most things. Today he fixed my vacumn cleaner which I was really hoping would curl up and die so I could get a new one.

Fortunately the washing machine defeated him.

There are benefits and drawbacks to Mr Fixits. :)

Seattle Wins! But your portrait is wonderful! If HWEM has the clothes, take him out with a camera and take a better photo. Glad HWEM was able to fix the iPod.
Glad you love your MAC. We almost have the money to pay cash for the new iMac. Our iPhones are terrific.
My son is to download a couple of books on to My iPhone -iPod. Glad you love your MAC to Marta.
Really! Robyn: Have HWEM, sit for some quick sketches. Just wonderful!
My son was on a plane from Seattle to Texas and the turbulent weather put their drinks on the ceiling of the aircraft. They landed just in time to be unhappy because the RedSkins were winning. Now, they get to be all happy.

Robyn, I love your sketch of HWEM and I remember that portrait well. I've been having the urge to try another graphite portrait. Have you?

Hubby and I both started our computer experience on a Mac but were converted to PC by the evil corporate world. When our last computer died we seriously considered going back to Mac but chickened out over price at the last minute. Hubby is the one with an iPod in this house and he upgraded to the thinner model this Christmas. I'm trying to convince him to replace the battery in his old one and give it to his loving wife. :)

Wonky values or not, that is a stunning portrait.

By the way, if your "encouragement" is planning on returning briefly, perhaps he could do something about my apparently defunct speakers...?

I think I KNOW him!! Well, it's probably the stunning immediacy of your drawing that is making me think that--you are a FANTASTIC draughtsman/woman/person. He has a wonderfully kind look about him, too. I love to think of your happy life together, there in beautiful Tuscany! I dearly hope to come see it in person one of these days soonish.

I went back to have a look at these older works...amazing grahite and the cutest sketch! You have captured so much character, albeit completely different, in both! Love the pears you did back then too...
ronell

That can't be your first portrait - it's fantastic! As Laura says, it feels as though we've met him. And your ink sketch is excellent too. Wonderful!

Robyn, You did a fantastic job on this portrait of HWEM! I've always worked on a MAC at home. When I was teaching, my first exposure to computers was the old Apple computers that we had in school. They eventually replaced them with MACs, and since that was what I was using for work, that's what I bought for home. My husband on the other hand, likes to pretend he doesn't know what to do when confronted with any problem on the MAC. He does however, work with copying and making music CDs well.

Two great images, so different yet clearly of the same person. I especially like the quick sketch - it is full of character.

Compared with him, tofu is interesting.

Wow Robyn...Your first graphite portrait?
You do know how good this is right???
Bravo!

Exceptionally generous comments. Thank you all very much. I think it would take my quite a while to get back into the mindset for this sort of graphite drawing. When I look at some of my recent work, I wonder if I'm going backwards. There's just not enough hours in the day to exploit every medium.

It was fun to read what everyone has to go through to justify buying a new appliance. Since it is my birthday today, I'm thinking I might go and check out those iPod speakers after all ;)

{did you know that vista dummies is 792 pages long}

That's your first graphite portrait?!? Is that a magic pencil? Can I get one too? ;D

Your work is wonderful.

Robyn, I love your story. Your wonderful HWEM (whom I still think of as "husband with enormous muscles", by the way) saves the day! How nice to pay him this tribute with your portraits. They are both great!

Thank you Lisa and Sherrie.

Liz - Thank you. HWEM is really tickled pink with your name for him. :)